I'm a little bit excited! I've been working on this recipe book for a fair while and a week ago I got to see it in the flesh, so to speak. And drumroll please... duh... duh... duhhh... here it is!! :D 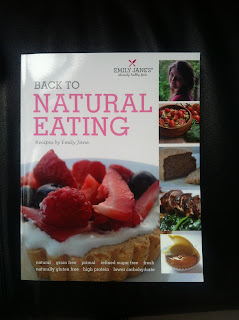 This is a photo of the paperback proof however the hardback is the first version released and is now avaliable from http://www.whiteleypublishing.com/book-emily-jane-back-to-natural-eating.html or on Amazon US here. It will soon also be avaliable on Amazon UK but I was too jittery to wait so thought I'd let everyone know :)

The paperback will also be avaliable in the next week or two so look out for that in a short while.

I thought I'd write a brief overview of the book

This book is all about the basics. So I start from precisely there; the basics. Touching on my past encounters with chronic ill health (expanding on http://emilyjanesfoods.blogspot.com/p/about-me.html ), opinions and ideas about types of food and the way we eat and possibly ways in which we might change this to enourage better health. However I'm a HUGE believer in if you're going to eat something not only should it be healthy but it should taste amazing! I wanted to write this book to share alternatives to sorely-missed foods, such as pizza and decadent desserts which are not so healthy and instead creating them from natural, healthy foods.

Oh yes, it's another Daily Mail article. I promise I do actually look at different sources. It just so happens that the Daily Mail has a fascination with the whole sugar debacle at the moment.

This article is definitely on the more subjective side of the fence. It's always good to read the factual papers/ articles but individual reports and experiences have their place. I really like to read the more personal accounts as this allows people to identify more closely with the problem.
Whereas with a heavily science-based article we can feel detached from the topic; we think, " Yeah, that's a pretty cool fact. It's awful the effect sugar is having. When will the madness end?" as we chow down on the half eaten snickers bar in our hand.

On the other hand, reading about a fellow human being, we feel a certain allegiance. We start to see the problem come to life. Seeing it in action, affecting others can highlight the problems in our lives that we may not previously have even known were there. We see this happen all the time when a friend or member of the family gets unwell and that particular condition or issue suddenly becomes a sore spot. Suddenly we know anything and everything about that problem and because we see the struggle and effect on everyone close to that person first hand we take a closer look at our own lives and we do anything we can to prevent that problem from happening to us.

So I hope that justifies my stance on personal experiences.

Now. Back to the article.

Most of us can identify with the author, Alison Tyler. Heavier than she admits that she would like to be, unwanted spots etc. These may be minor problems in comparision to what damage sugar and grains can go on to cause when consumed to excess. However, these are everyday issues which I'm willing to bet are top of the list for a lot of people and are often a precursor to those worse issues.

To summarise, she experimented by omitting most sources of added sugars and processed foods. She did still eat grains, so I hasten to add that therefore she has not technically eliminated all sources of sugar (albeit in starch form)...
Alison kept to this diet for a month, stating;

" I feel more energised throughout the day, probably because I’ve got off that blood sugar high-low rollercoaster, and I’m 9st 13lb — more than half-a-stone lighter — without adjusting the rest of my diet. "

She even noticed her tastes appear to change once the decrease in sugar is applied;

" On Sunday, I ate half a pomegranate and it tasted sweeter and more delicious than any I’ve eaten before. "

I have definitely found this to be true. A fresh strawberry is the sweetest, most delectable thing ever when all that sugary processed junk has been thrown out.

Alison does say in conclusion;

" I’ve almost finished a month of being totally sugar free — and I must admit I’m looking forward to eating it again, albeit in far smaller quantities. "

Overall, decreasing the amount of sugar in the diet is a good step in the right direction and hey, all big journeys start with a single step. To say you will never ever have another food product containing sugar in this day and age, well, lets just say you are bound to slip up at some point. As long as this is an abnormal occurence every once in a blue moon this isn't too big a deal. It's when this irregular occurence becomes a great deal more frequent that the problems will start.
Posted by Emily Jane at 16:24 No comments:

Is sugar the devil?


Now renamed "Flaburary" due to the multitude of people giving up their new years resolution diets. Who needs a better excuse to start a fiery discussion on sugar? Not me that's for sure.

Occasionally I will try to delude myself that, hey, that cute little cupcake with the creamy icing and a sugar spun mouse perched on top won't do me any harm. I mean it's a mouse made of sugar - how could anything that cute be a bad thing? The mouse seems to wink and mischeviously beckon with its lightly dusted tail. I find myself being drawn closer and closer until my face is literally pressed up against the glass of the shop window.


In that moment I think a number of things;


2) how did they spin sugar in the shape of a mouse?


3) I'm not allowed to eat that but really would it be that bad if I did?

Whilst I may continue to admire the artistry and ability of food producers to make unhealthy foods increasingly enticing (ok, so my example may be a little extravagant...) but the third thought is what most often crosses peoples minds when faced with a potential diabolical sugar disaster.


More often than not this question flits across the brain before disengaging from the shop window and drooling over the counter as you point to the alluring cake in question. However next time you find yourself in this situation, just stop. Stop and think.

The moment on the lips, a lifetime on the hips might not indicate the only place that sugar load ends up causing unwanted effects.

Check this out; http://www.dailymail.co.uk/health/article-2094812/Sugar-controlled-like-tobacco-alcohol.html
This article talks about the toxicity of sugar (although I would have liked more information from the article...)

I've got to admit I get a little too excited reading this last article. I just find it fascinating! Definitely read this one.

"If you want to cause insulin resistance in laboratory rats, says Gerald Reaven, the Stanford University diabetologist who did much of the pioneering work on the subject, feeding them diets that are mostly fructose is an easy way to do it. It’s a “very obvious, very dramatic” effect, Reaven says."


"The second observation was that malignant cancer, like diabetes, was a relatively rare disease in populations that didn’t eat Western diets, and in some of these populations it appeared to be virtually nonexistent."

"Accordingly, magnesium deficiency combined with a high-fructose diet induces insulin resistance, hypertension, dyslipidemia, endothelial activation and prothrombic changes in combination with the upregulation of markers of inflammation and oxidative stress."


After my own experiences I know that I feel awful when I eat sugary foods; dizziness, acne, weight gain, almost jittery to name a few effects. Sugary foods include (as mentioned in the second article above) not only the white granulated sugar but also anything containing sugars; cakes, pastries, ice cream, soft drinks etc. So I don't eat them. As I'm sure everyone else has experienced from time to time; I still find it difficult to pass shops I know would provide me with an immediate sugar hit. Yet why does this happen? Why do I want something, crave something which I know will hurt me later?

Through personal experience I think it's obvious that sugar, in it's many forms, has addictive qualities.  Anything which helps healthier foods to be made more avaliable to people is a great thing, however I don't think taxing foods higher in sugars will prevent people from buying them. I think that's underestimating the influence of sugar as an addictive substance and how prevalent it is in our society nowadays.

After taking another look at that cake and seeing it for what it is; not only an almost dead cert for immediate weight gain but the prospect of potential chronic toxicity, leading to a plethora of chronic diseases... that sugar spun mouse topped cake isn't looking so cute, in fact a bit more like sugar coated vermin.
Posted by Emily Jane at 02:15 2 comments:

Please... not another chicken...

I'm all chickened out.
Well that's a lie, I'm never that tired of chicken :) 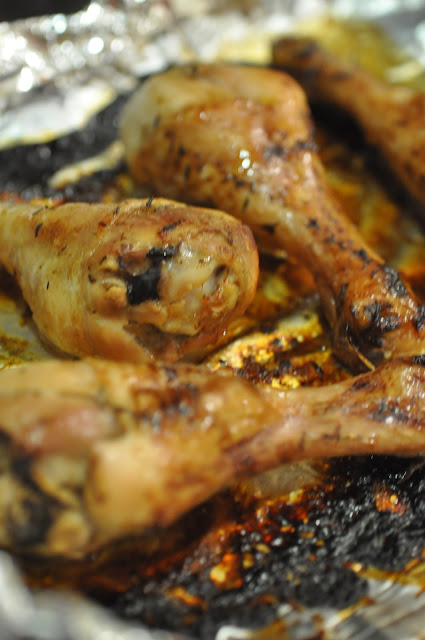 I chose the drumsticks first, along with a red pepper and beetroot salad with a clementine dressing - a great choice even if I say so myself :) 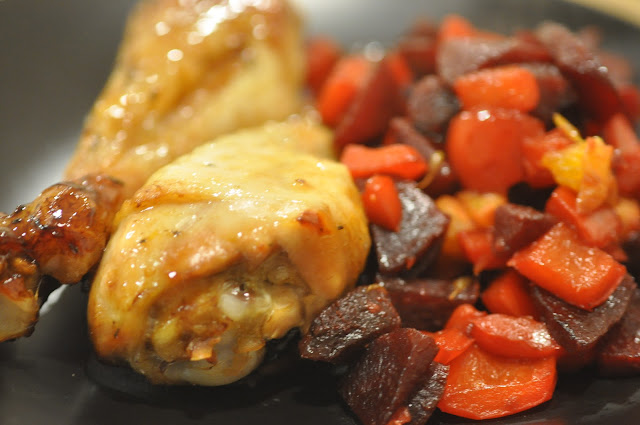 NEWSFLASH (however very ever-so-slightly late); I think the Paula Deen/ diabetes story has been covered to death but hey, why not throw my two pence into the mix of it all? First of all I would like to say that I'm not a scientist or a doctor I just like to read and have opinions :)

I think we need to take personal responsibility for what we eat. I'm guessing noone's being force fed Paula Deens unhealthy-high-fat and high-sugar/carbohydrate dishes? If you choose to make some of her dishes and theyre unhealthy for you then dont make them and you wont have to eat them!

I like to think that when stories like this come out it causes people to pay more attention to the food they're eating rather than getting drawn into a glamourously sugar frosted world of ignorance.

In a lot of the articles I've read about the Paula Deen saga, her foods are blamed for the high fat content alone. I'm sure the vast amount of poor quality fats used are a contributing factor and probably do get more than a look in. Although, seeing as diabetes is a loss of control over blood SUGAR levels and it is the sugar in the diet which is easily stored as fat in the body and the sugar which sends the blood glucose levels sky high... see where I'm going with this? Fats aren't the big issue - healthy fats are a vital part of our diet along with healthy carbohydrates in the form of vegetables and fruits and healthy proteins such as meats, eggs, nuts. However a processed grains and sugar based diet mixed with copious amount of unhealthy fats... maybe not so much.
Posted by Emily Jane at 06:06 No comments: 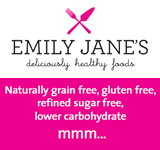